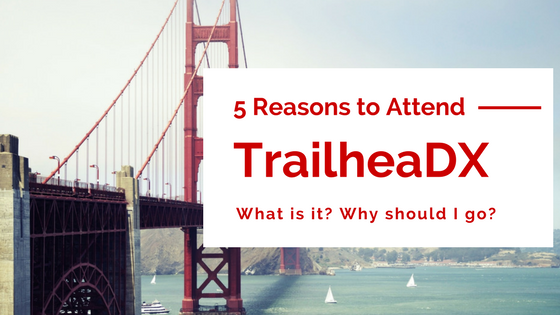 Salesforce is known for putting on incredible events. Over the last decade, Dreamforce has developed into a massive celebration of the Salesforce ecosystem. Part of what makes Dreamforce so incredible is it’s size and it’s scale. Last year’s Dreamforce had over 170,000 registrants (making it nearly as large as Pasadena, CA, Tempe, AZ, or Ft. Lauderdale, FL) and was headlined by rock legends U2.

But as Dreamforce gets ever larger, it can be hard to ensure that developers still get the content they crave. Ultimately, Salesforce is a development platform and the developer experience is a key part of the core product. So last year Salesforce tried something new - they launched a developer-centric conference in June that is more intimate and more targeted to developers and admins: TrailheaDX. Here’s how they describe it:

TrailheaDX ’17 is the must-attend developer conference of the year. Our engineers, scientists and product leaders will be your guides on a path of discovery and adventure. Join us to learn about the latest Salesforce technologies, meet other makers, and have fun along the way! (We might have s’mores too!)

Right away they signal that this is a technology focused event as it will be lead by “engineers, scientists and product leaders”. TrailheaDX is far less geared towards sales and marketing professionals, instead focusing on the myriad things you can do with Salesforce as a technology platform. You can see Marc Benioff’s TrailheaDX speech from last year here.

This year’s conference will be especially important because of Salesforce DX. Last October, we featured a post on Salesforce Ben giving voice to some of the concerns Salesforce developers had been feeling for the last few years. We were answered literally the next day at Dreamforce with the announcement of some exciting new changes called “Salesforce DX”. DX represents a fundamental shift in how Salesforce developers and admins will work with the platform. TrailheaDX (as it’s name implies) will be the first major opportunity for Salesforce to update the community on how DX is going and when it will be more broadly available.

Should You go to TrailheaDX?

Many developers are wondering whether they should attend TrailheaDX or Dreamforce. Here are some things you might want to consider as you think about your budget and schedule.

Because it’s a technology conference first and foremost, TrailheaDX is a great opportunity to brush up on changes to the platform and newly emergent best practices like source control, continuous integration, and new features from Salesforce like Global Picklists.

Salesforce DX was announced at Dreamforce last year. The developer preview happened soon after that and early this year, the pilot expanded to a larger group of developers. TrailheaDX will be an opportunity to get the latest update on where the project stands. You can also get up to date on best practices your team needs to adopt to leverage the full benefit of Salesforce DX such as implementing source control for your Salesforce team.

The other big announcement at Dreamforce last year was Einstein - a new AI platform that developers can leverage to make their teams more productive. Given that TrailheaDX is a developer conference you can learn more about what Einstein is and how you can leverage it for your own team.

I don’t think we need to tell you how fun Salesforce conferences tend to be. Last year they booked Lenny Kravitz for TrailheaDX and had talks by luminaries such as Steve Wozniak.

Hope to See You There

As of this posting, early bird discounted tickets are still available on the TrailheaDX website. We’re excited to be there and spend time in person with a large collection of Salesforce developers. We feel lucky to get to work with Salesforce users on every continent bar Antarctica (so far) and it’s always fun to meet in person. We had fun meeting a lot of you at Dreamforce 2016 and had some amazing brainstorming sessions. Hope to see you there!