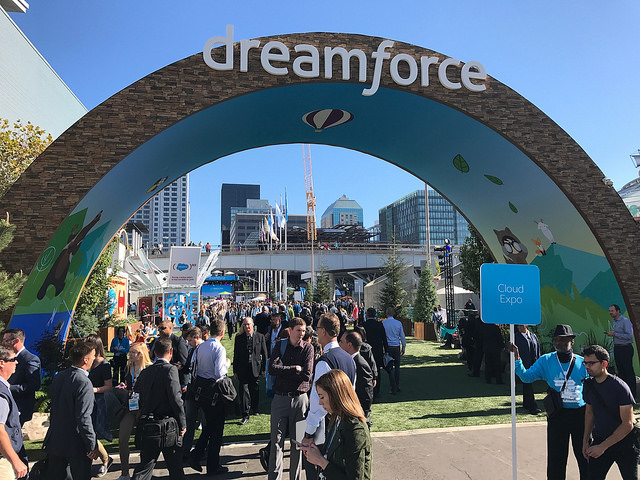 Dreamforce is an incredible event. This year hundreds of thousands of people - Salesforce developers, end-users, admins, marketing professionals, ISVs, partners, employees - descended upon downtown San Francisco for a week of learning and celebration. We are now a week removed from Dreamforce and we’re still soaking in all the amazing experiences and conversations that we had there.

Though we’ve both been to Dreamforce as individuals, this was the first Dreamforce for Blue Canvas and we wanted to share some of our highlights.

Dreamforce included over 3,000 sessions and talks of all sizes from mega keynotes to specific talks about specific topics such as: Integrate Slack & GitHub in Lightning Apps with Coveo Search & Machine Learning and The Salesforce Development Lifecycle (Salesforce DevOps).

We spent most of the week in the Developer Zone soaking in incredible talks at the Innovation Theater, the Developer Theater, and the Consultation Outpost Campfire.

One of the hottest themes was DevOps and Continuous Delivery. It came up again and again in session after session. Most of the developer talks we heard included at least some discussion of Continuous Delivery in the talk itself or in the Q&A. On the floor we had dozens of great conversations with Salesforce developers and admins about their plans, successes and challenges implementing CI and CD. It seems everyone wants to speed up their Salesforce deployment cycle.

Several folks had were getting close to CI using tools like Jenkins, Bamboo and TravisCI. We got to speak in person with Mark Klinski of Atlassian who gave an amazing talk with Melanie Wright about Atlassian’s Salesforce development workflow. Salesforce themselves had some ideas around this with their newly minted Salesforce DX (which we wrote about last week).

Testing was another popular topic that further signaled the zeitgeist around DevOps and Continuous Delivery. Automated testing is a key part of any CI pipeline and there was clearly a lot of interest in testing strategies for Salesforce developers. We learned about automated UI testing with Selenium from Salesforce.org’s Chris McMahon and Salesforce’s Kevin Poorman gave an enlightening talk about unit testing.

The other major topic of conversation on everyone’s mind was source control. Git was a major theme throughout Dreamforce. Those that weren’t using Git today, knew that they needed to be and were actively using Dreamforce sessions as an opportunity to learn about Git flows and best practices. We talked to developers using GitHub, GitLab, Bitbucket and their own private Git repos.

Though Git was on everyone’s mind, there still doesn’t seem to be agreement or full understanding of best practices for Git and Salesforce. It’s an open topic that the community is actively engaged in.

In the Consultation Outpost area, Salesforce’s Christopher Marzilli was dropping mad knowledge during his campfire chat’s on Sandbox strategies and source control for Salesforce developers and admins. He facilitated some great discussions amongst his audiences about source control, Continuous Delivery and deployments.

Learning From the Experts

The speakers were as engaging as they were knowledgeable and every session we attended was packed with useful, actionable information.

Every talk seemed nearly full and the quality of the questions posed by each audience amazed us. There is obviously a very active and engaged community around Salesforce and it was impressive to see.

We also loved hearing directly from Salesforce’s leadership about their future vision of the company and technology at Benioff’s Keynote around Einstein and the Developer Keynote announcing Salesforce DX.

In addition to the sessions, there were a number of awesome Salesforce booths as well. We had great talks about security best practices with the Salesforce security team and got to discuss the Lightning Design System with the developers actually working on it. We even threw on some virtual reality goggles and stepped into the dystopian future of CRM user experience.

Finally, loved hearing about the exciting future of Salesforce IDEs like the Welkin Suite, IlluminatedCloud and MavensMate for Visual Studio Code.

Most importantly for us, we got to spend time speaking face to face with dozens of Salesforce developers, admins and partners and hear about their experience with the platform. We got to demo our product and spitball ideas for new features. We were so grateful for the opportunity to spend time talking directly to Salesforce users and collect feedback. We learned a lot that will influence the Blue Canvas product roadmap directly.

From the awesome events like CRM Science’s Puzzle Party to the U2 concert at the Cow Palace, Dreamforce has an aura of celebration. One attendee told me that Dreamforce was the first conference he had seen that seemed to understand that learning and networking at a conference can actually be fun. Benioff’s team seems to understand that intuitively.

We felt lucky that we were able to visit with so many awesome people in a relaxed and social setting.

Opportunities to Give Back

The Salesforce community is incredibly generous and you see it at every level and in every way. Benioff’s keynote was filled with examples of how Salesforce gives back to the community, as well as encouragement and ideas for how everyone can make a difference. I remember being struck by Benioff’s call to go visit your local public school and ask the principal how you can help. How many technology keynotes include that kind of exhortation?

This attention to care and detail happened even at the garbage cans which were staffed with people who could help you sort your trash, recycling and compost.

We learned about Pledge 1% during a conversation a member of the Salesforce.org team.

As new kids on the block, Alex and I were perpetually amazed at the kindness and generosity we received from long standing members of the community like CRM Science’s Alex Sutherland and Code Science’s Mike Wall. Everyone wanted to give us feedback, make introductions for us, and to help us solve the challenges that Salesforce developers still face around source control and continuous delivery.

Ultimately, Blue Canvas left Dreamforce feeling extremely grateful. We felt grateful for the opportunities to celebrate and learn, as well as the inspiration to give back. We felt that this is a wonderful community and we look forward to continuing to serve Salesforce developers and admins and make their lives easier.