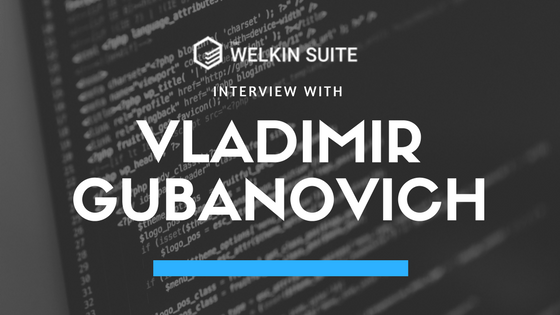 What is your role at Welkin Suite?

Well I guess kinda my official title is Head of Product. It is hard to explain the exact role in a “startup-like” product where everyone is focused on the same outcome – making the product better 😊

How did you decide to build Welkin? What is your background with Salesforce?

3.5 years ago I’ve switched from my comfortable .NET position, to start the new Salesforce development department in our parent company – Softheme. One week after starting, I completed the DEV401 certification and started my work on one of the project. After spending a full two days just trying to download a huge project using the Force.com IDE, and then working for a full week with the other tools, I understood that I was missing the “Visual Studio way” of doing things, where the IDE was your friend, and not the enemy. Our development team was wasting just too much time and energy on fighting with environment instead of doing actual development for our customers.

That is why I started a “pet-project” on building some simple extension for Visual Studio, and in a couple weeks I had an ability to pull files from the org and deploy changes, however my timeline expectations were waaaay to optimistic. So after talking with Rustam Nurgudin, at that time he was CTO of Softheme, we decided to start to build a small team which was would be working on what we would eventually call The Welkin Suite, and here we are now.😊

Regarding my Salesforce background – over this last 3.5 years, I have been occasionally developing some things for Salesforce, and working with our team of 35 Salesforce developers on technical design for complex applications. I also work with our team on Salesforce lectures for students and interns, and, of course, I am always keeping an eye on all the new stuff happening around the Salesforce platform!

What is special about Welkin Suite?

For those who are familiar with Visual Studio, the shortest answer would be “a Visual Studio experience/approach for Salesforce development” – as this is the main cool idea of the IDE. If I’d try to explain it in a bit more words – we want developers (and admins now) to feel comfortable while developing, to have everything they need, just a couple clicks away, and without any need to do lots of actions to setup and configure the tool (or tools).

What do you think about Salesforce DX?

The shortest and the most descriptive answer is – “Finally!”. We were waiting for this for such a long time, and I’m happy, that very soon, Salesforce development should be much easier for those who’d like to use complex development flows, source control solution, continuous integration, etc.

To be honest, this was a huge question for us during these past years of how to deal with this – we didn’t want to “invent the wheel” and try to build some “shaky” solutions to resolve this issues for our users, and now we don’t have to.

Also I like the fact that SFDX has forced SF team to completely change how permission sets in Metadata API are working – instead of querying data from lots of different sources now everything is available with just one retrieve request. Now we’d like to get the same for Profiles 😉

When I just started working as a developer, I used both SVN and TFS, but I wasn’t happy with either of thes – SVN is to simple and limited, TFS is to complex and sometimes I think it’s smarter than me… For the last 6-7 years I have been using Git as a source control – I’m still far away from being guru with it, but it’s satisfying all my needs in a very straightforward way.

Speaking of the tools – I’ve used GitHub just a couple times, but personally prefer Atlassian Stash or Bitbucket as a hosting repository.

And the most interesting thing is that I’ve never used the built-in Git integration options within any of the IDE’s, not even in the Visual Studio – I prefer standalone applications, which are focused only on Git. Why? I believe that there are experienced teams of professional standing behind these tools – they spend years on making their software better, releasing new versions with improvements and new features, and they’re making money on that software – so I know that they are good in this area and that they are doing their best. At the same time, IDE’s are focused on the development. For example, I am sure our team can build a good Git client in some time, however, I believe it’s better to spend our time and resources on building the tools in which we are best at. 😊

What kind of hooks does Welkin Suite have into Git?

There’s no hooks for Git now in TWS, however we do provide options to do all of the most common actions with Git repositories right from the IDE – commit, push, pull, create or merge branches, see the git log, and view the differences between commits, etc.

What’s coming down the pipeline for Welkin Suite?

We have some great features in the works that are planned to be released by the Dreamforce’17 – among them, for sure, is support for Salesforce DX (right now while I’m writing this, our team is working on SFDX), however we are not only adding new features for developers, but also for those who are working with the configuration of the Salesforce platform. For example, we want to implement cool editors for Validation Rules and Workflows, and add these to our own Retrospective Debugger, along with to keep working on our new Admin Panel, which provides access to most of Welkin Suite’s declarative development/administrative features and tools, in the very convenient way. Plus, of course, implementing ideas from our great users!

What are you most excited about for Dreamforce ‘17?

The thing I love at Dreamforce, is the overall atmosphere of Salesforce “Ohana” - it’s incredible and exciting to spend that couple days, to get the energy for the whole next year! I always enjoy the sessions and always come back with some new knowledge, however I can’t attend all of the sessions that I want, as we will be talking with Salesforce Devs and Admins at our booth there – the most exciting part of the Dreamforce for me. And what makes it even cooler is that every year we hear new great ideas from Salesforce developers about how to make the IDE even better!

Any predictions for Dreamforce ‘17?

It seems that every year since 2014 (my first DF as a guest), Salesforce is paying more and more attention to developers, and my hope is that this trend will continue this year. For me, it’s hard to predict anything other than a full focus on SFDX in the development zone.

What is the most interesting development from Salesforce in the past 6 months?

Of course, it’s SFDX, however I’m enjoying the changes in Lightning over this time too – it’s getting more powerful and comfortable to develop. I’m also watching very closely the progress around Apex Debugger, but a bit upset about the lack of public API’s to use.