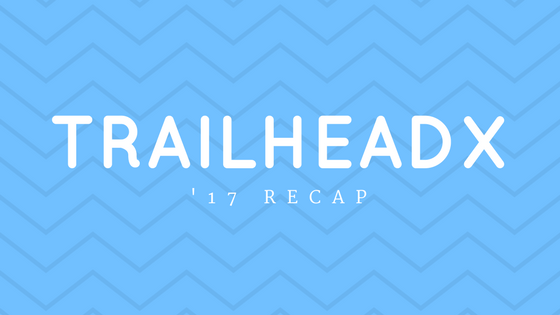 TrailheaDX was a unique conference. Salesforce is known for doing conferences right, but there was something special about TrailheaDX because it was so focused and developer friendly. It seems like an experiment from Salesforce in trying to provide more tailored content to developers and we hope that they will continue to have this conference in the future. We had a great time at Dreamforce last year and we look forward to it this year, but TrailheaDX was our kind of conference.

There were so many great technical sessions that it was easy to get swept up in all the exciting new ideas coming to the Force.com platform. And because it was so much smaller than Dreamforce and because everyone there was fairly technical, the hallway conversations that we had were all deeply interesting. People weren’t running off to their next meeting or session as fast as they could, so you could really dive into topics and share best practices and learnings.

TrailheaDX was an opportunity for Salesforce to go into greater technical depth on the latest tools it has built for developers. There were three major categories that pervaded the keynote and many of the sessions: Einstein, DX, and Lightning. If you missed the show, the Keynote is worth watching and will provide a good high level overview of each:

Salesforce Einstein is one of the most intriguing announcements to come out from Salesforce in the last few years. Candidly, artificial intelligence and machine learning can sometimes be employed as marketing buzzwords rather than actual technical concepts. At TrailheaDX, Salesforce provided a lot more depth on how developers can leverage Einstein to build powerful applications.

The conference gave more insight into how developers can interact with Einstein through the various APIs and SDKs that they will soon make available. We had heard already about the Vision API which lets you do image classification (i.e. is this a hat or a shoe?) as well as object detection in a picture (i.e. there are 5 shoes, 3 hats and 2 shirts in this photo). This will allow Salesforce developers to leverage a powerful API for image recognition without having to build an entire image recognition framework from scratch. The same goes for the Langauge API which will allow developers to figure out things like sentiment and intent to purchase based on plain spoken language. Again, it’s significant that Salesforce is making these tools available so you don’t need a full time team of computer science PhD’s to maintain your Language API. Along with the Analytics SDK, the APIs that Einstein promises to deliver will make Salesforce developers even more effective and able to do more with less time investment and maintenance costs.

Another exciting announcement from the keynote was the opening of the beta for Salesforce DX. As you know, we’ve been anticipating and excited by DX for a long time. But seeing it announced and covered in more detail is encouraging because it means that Salesforce is continuing to follow through on it’s promise to improve the experience for developers on the Force.com platform.

You can now sign up for the Salesforce DX beta here.

We learned more about the three core principles of DX: you need to set up your own version control system to be the source of truth for your orgs; rapid testing and deployment through Scratch Orgs is the future; and an open and standard development experience is the goal.

If you want a more detailed introduction to Salesforce DX and what it can do check out Wade Wegner’s session.

To learn more about the new CLI from DX check out Dave Carroll’s session.

Historically, one of the best sessions at Dreamforce and Salesforce events is the Meet the Developers panel. Here you get some really insightful answers to technical questions from actual Salesforce staff asked by the audience. For example, there was this awesome question from Jeremy Ross of the Good Day Sir media empire about Apex improvements:

Or this one about the source of truth and version control for Salesforce admins and declarative changes.

You can watch the entire Meet the Developers session here. It’s worth doing on your next lunch break. All other sessions are posted here.

TrailheaDX set up some interesting questions that we can look forward to more information about at Dreamforce ‘17. We’ll see you there!